Stories of the Lost & Found

There are people who have suffered unimaginable loss. The loss of someone they loved or the loss of themselves in one way or another. Some of those who have suffered have chosen to live with grace and gratitude. Their choices are brave and rich. Those special few inspire me and sharing their stories is my passion. This is such a story.

Darcy’s dad waited outside the doctor’s office. He couldn’t bare to hear the test results. On the other side of the door, Darcy along with her mom and sister received the news that Darcy was indeed gene-positive for Huntington’s Disease. She saw the pain and fear in the eyes of her mom and sister and forced herself to hold it together. She asked them to bring her dad into the room.  It took only one look at mom for him to know.

Fewer than five months earlier he’d been diagnosed with Huntington’s Disease. He wasn’t ready to deal with his own diagnosis, let alone the guilt of passing it on to his daughter. But part of Darcy’s decision to be tested was to prove to her dad that this disease didn’t have to define him or anyone else. She resolved to show him there was still a lot of life to live.

This close-knit family had a new mission and Darcy would lead the way.

Darcy is a beautiful thirty-two-year-old woman. She loves her family and is proud to be a daddy’s girl. If you met her tattooed self and overheard her speak of HD you might think she was talking Harley-Davidsons. That would seem more her style.

But this self-described free-spirited go-getter has embraced this new challenge like she would anything else. She is all in, full speed ahead.

Children of someone with Huntington’s Disease have a 50/50 chance of being gene positive themselves. The option to be tested is new and the choice to do so is a very personal decision. Darcy is the only one of her siblings to make the choice thus far.

None of us know what the future holds, but we have certain expectations and dreams. When someone close receives a diagnosis of a disease that has no cure the future instantly becomes clouded. When you receive that diagnosis yourself it would be easy to see no future.

The symptoms of Huntington’s Disease typically appear between the ages of 30 and 50. The decades of life when you work the hardest and raise your children. Although the disease progresses differently for everyone there are three stages. At its onset the symptoms can be subtle and treatable:

In the middle stage, the symptoms worsen. More therapy and medication may be needed as day to day activities become more difficult. During the late stages, the person with HD is completely dependent on the care of others. While the person is no longer able to walk or speak they are still able to comprehend and retain awareness of their surroundings. They are trapped in a body that no longer works. Death typically comes from complications of the disease and not the disease itself. Suicide is the second highest cause of death, as abilities are lost, depression sets in, and patients feel they are a burden to their families. It is an ugly reality.

More than anything in the world Darcy wants to be a mother. This diagnosis deeply complicates this desire. The uncertainty of knowing if she will be well enough to care for a child and the possibility of passing this down weigh heavily on her heart.

The day Darcy’s dad was diagnosed the lives of this family changed forever. Darcy dove into research, because she believes knowledge is power. Early on in this journey, she was welcomed into a highly supportive community through the Minnesota Chapter of Huntington’s Disease Society of America. This group provided resources and inspiration when it was most needed. The people she has met have become extended family as they share a connection no one wants to.

Darcy regularly attends an HDSA support group and has gotten serious about fundraising. The progress made in the last twenty years regarding the disease provide hope for everyone affected.

In addition to finding a new purpose and hope, she has gained a deeper appreciation for seizing the day. Always, someone who believed in living life to the fullest, Darcy now feels a heightened sense urgency to experience all she can.

Since she is passionate about yoga and activity is a good tool to keep symptoms at bay, so she is getting her yoga teacher license. No one better to lead people through a mental, physical, and spiritual exercise than someone so in touch with their self. 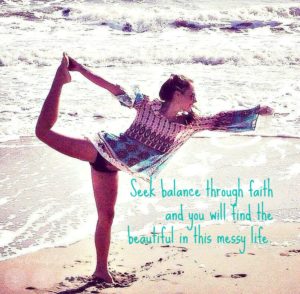 Darcy also found love after her diagnosis. She fell for her best friend, who she calls her rock. She describes him as selfless and loving and credits him with giving her hope and putting a smile on her face.

“I made a Promise to God and to myself that I would love this life.”

Darcy sets a stirring example of how to live life as she refuses to be defined by a diagnosis. This disease will not extinquish her bright spirit. She leans on those she loves and her deepened faith but is also gracefully leading them on this journey. So while life may not have gone as she imagined it would, she is determined it will still be beautiful.